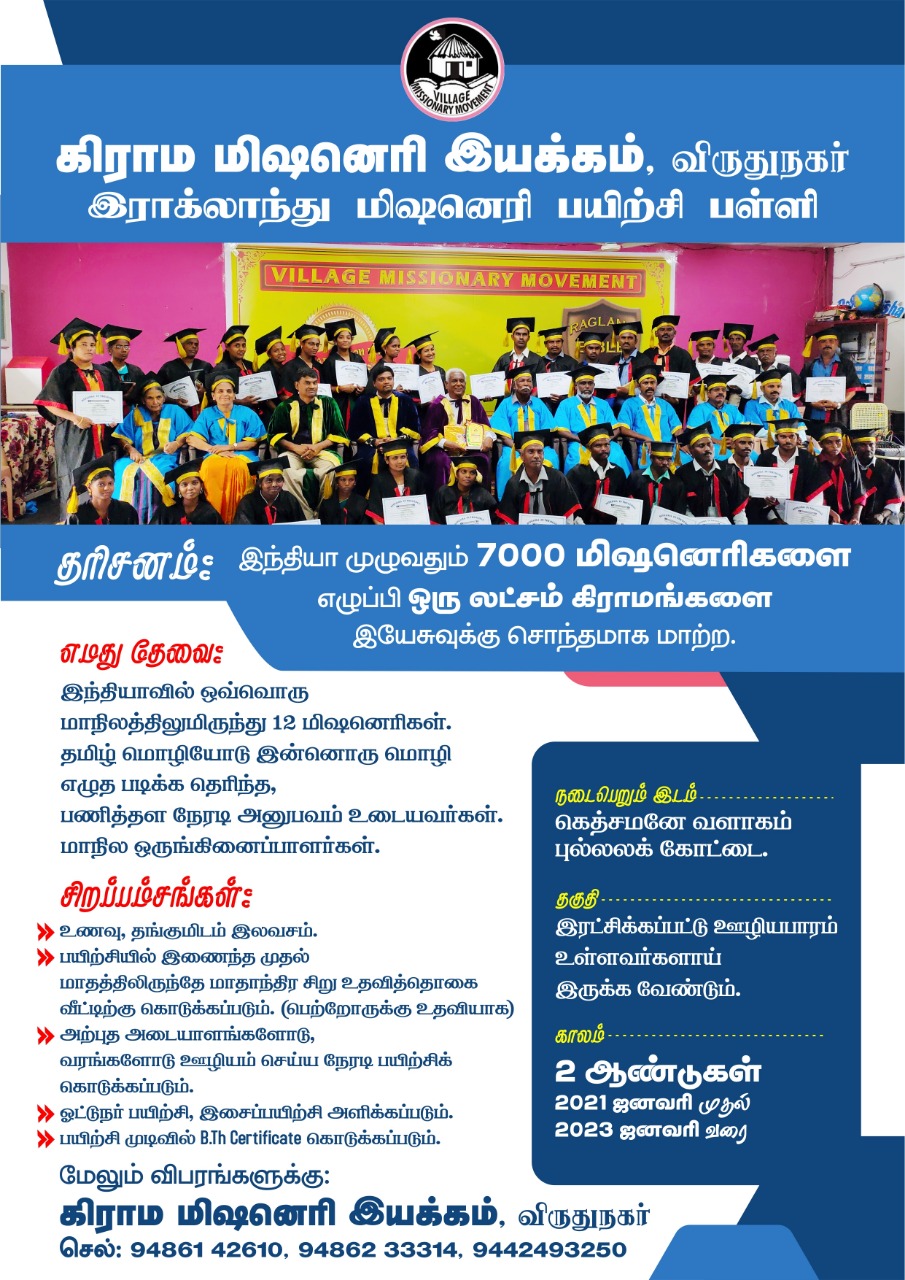 Village Missionary Movement was started in July 1996 in a village called, Kokkalanchery near Virudhunagar of Tamil Nadu state in India.

Bro. David Ganesan is the Founder and Director of the ministry.  He was from a Non-Christian family background from the village of Pullalakkotai.  Prior to his acceptance of Christ, he used to threaten the Christian workers who come to the village.

It so happened that Ganesan fell sick and that he was diagnosed as a heart patient. The doctor gave up hope saying that he will die within a year.  Ganesan’s heart was filled with fear and sadness on hearing the word from the Doctor. He was left with an option to seek the divine healing which prompted him to go to all the temples in his surroundings and the nearby towns, but in vain.  Then he decided to go to the meeting places of other religions. By the way he came in contact with a local church to which he went regularly, wherein he was filled with the peace and joy which could not be explained. Ganesan went to the hospital for a recheck-up.  To every one’s surprise, doctor told that not even the trace of the disease was found.  Filled with joy and happiness, Ganesan felt like dancing in the doctor’s room.  He came to a conclusion that only Jesus Christ should have healed him.  But as days passed by, doubts filled his heart that which deity healed him as he went to various temples and sought the help of different Gods of various religions. He presumed that some divine power had healed him, but not necessarily be it Jesus Christ.

In his village as his house was small, he used to sleep in an old building. One day as he was sleeping with the door and windows locked, he awoke to see a man in white clothes standing inside the room, weeping with great anguish, expressing his burdens, saying,   “I am the true God and there is none besides me.  The people whom I have made have gone far from me.  I save them from sins, poverty and diseases.  But they do not acknowledge me but go to other Gods”. Ganesan have never met such a weeping person in his life.  After seeing this, he too began to weep aloud. Then a woman staying nearby hearing the weeping noise and knocked the door.  As Ganesan opened the door the man in white clothes disappeared.  Ganesan did not care to explain to the woman what happened there as he feared that she may think that he was mad.

From that day onwards, whenever he saw a crowd of people whether in a bus stand or market place, the voice which he heard in the vision will be literally heard again.  Immediately he will begin to weep.  But still he couldn’t identify the person of the vision.  One day as he was waiting for a friend near a shop he saw that the shopkeeper was reading the Bible.  In a casual conversation, Ganesan told of the vision of the weeping man and asked the shopkeeper whether he could help him to know the meaning of the vision. The shopkeeper was amazed at what Ganesan told. He opened the Bible and explained that the words of the weeping man are the words of God in Bible.  He showed every reference from the Bible relating to it.

Ganesan was amazed at this understanding of this vision.  Immediately he was fully assured that it was only Jesus Christ who had healed him.  From that day onwards he committed his entire life unto Jesus Christ.Remembering Jesus, weeping in his vision, David Ganesan was convinced that he should stop the weeping of Jesus and that he has to preach the Gospel of Jesus to all the people.  It is to be noted that Ganesan even without having a copy of New Testament, during his first few months went to all nearby villages explaining his vision and pleaded with people to live for Jesus.  Later few of his friends, who agreed to the conviction of Ganesan, joined him to form a team which later took the form of a Trust under the name and style, “Village Missionary Movement”.